This is the second post in my 2018 Christmas South Island Road Trip series with Steve Richards.

This January and most of February has been spent much the same way as previous years, namely endlessly sorting and processing images from our Christmas trip.

My last post finished up with Steve and I in Blenheim preparing to travel through the 180,787 hectare Molesworth Station.
Steve and I had always been intrigued by the thought of doing the 207-kilometre trip through the Molesworth, from Blenheim to Hanmer Springs. We wanted to explore the scenery and take some landscape images.

So with great enthusiasm, we spun a sharp right-hand turn off the main highway south of Blenheim and zoomed west inland for a few clicks and then took another sharp turn,  left and headed south again. This had us running parallel with the east coast. However, we were far enough inland to have high mountains where no cattle dare to roam between us and the coast.

The last quarter of 2018 had been very wet for much of the South Island and Molesworth Station was no different.
Everything was green, green and yet more green, the grass was long and luxurious, food was certainly not in short supply for the 10,000 cattle the farm supports. The interesting thing about the cattle was that I only saw about 30 potential beef dinners for the entire trip through the farm.

The road is all gravel but pretty well maintained.
The first thing that hit me as we were passing through, was the old fashion roses that dotted the landscape, adding some lovely soft pink to the otherwise various shades of green.

A little pink here and there is a good thing.

Everything was green and the Willow trees were thriving along the river valleys.

Willow trees were not the only things thriving.
European Hares were in such large numbers that my old professional hunter inner-self was awoken. That inner-self will shoot almost anything if there is money in it. I began wishing we had permission to thin the numbers out and sell the meat.

Groups of up to 5-6 hares loitered along the road edges.
Hares make wonderful casseroles, convert them to protein I say. 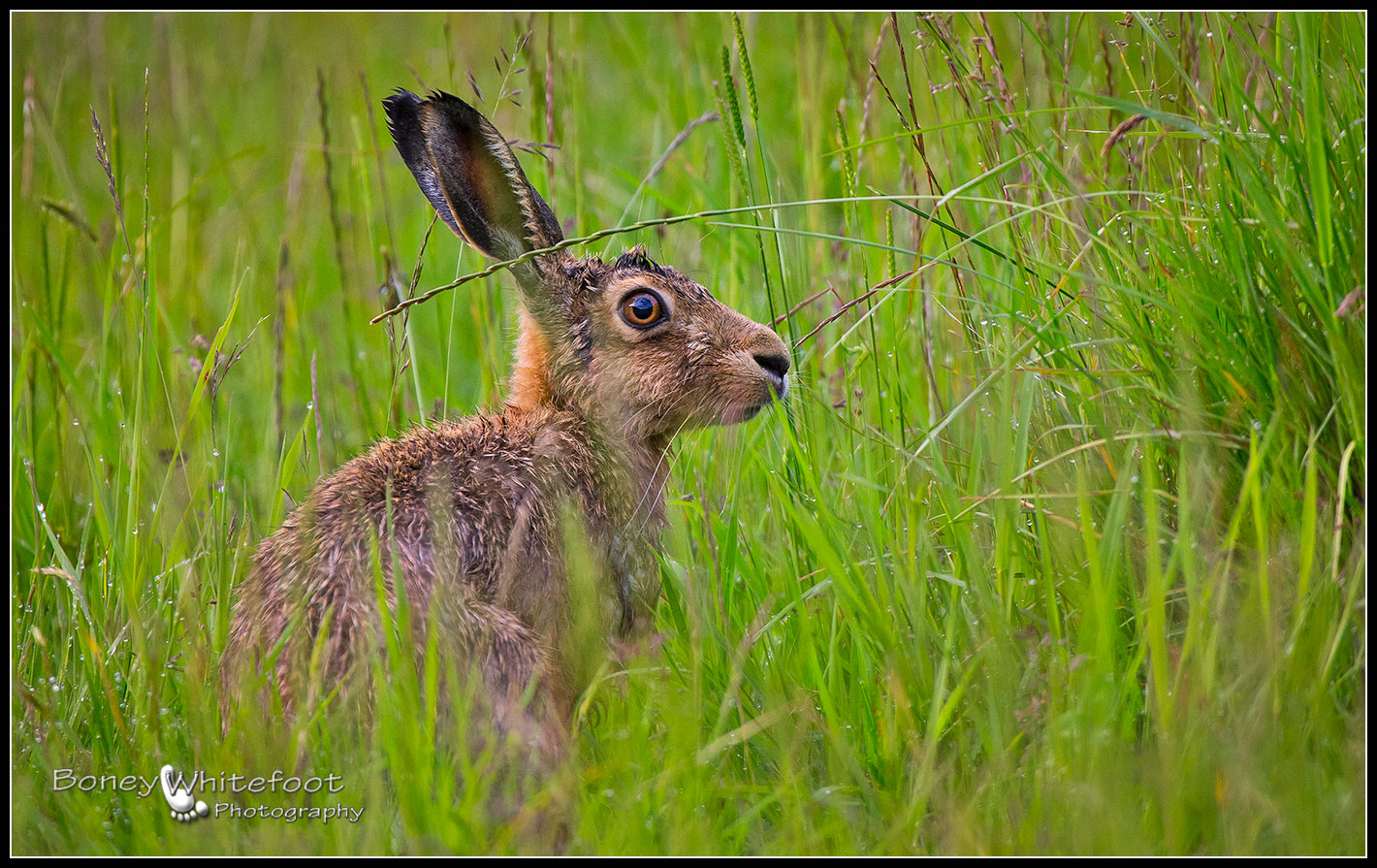 Hares make wonderful casseroles, convert them to protein I say.

Pressing forward as intrepid explorers are apt to do, we decided that Cob Cottage was a Bonnie place to stop and have nibbles.

Pressing forward as intrepid explorers are apt to do, we decided that Cob Cottage was a Bonnie place to stop and have nibbles.

As we travelled through the farm the weather was turning from blue skies with a few high puffy clouds, to cloudy overcast and then it began to drizzle.

Another major drawcard for going through the Molesworth was a chance at getting images of a bird neither of us had up to that point in time. The Black Fronted Tern or tarapirohe breeds only in the South Island and nests mostly on shingle islands in the middle of the major rivers on the eastern side of the great divide.

We knew there were a few  Black Fronted Tern colonies on the Acheron River that flows through  Molesworth. The excitement and anticipation of finding these colonies had been bubbling away deep inside me all day. Now with the weather and light conditions turning for the worse, disappointment was replacing the excitement.

From despair to happiness

Now I can’t say for sure how many times in the past that my feelings of disappointment have been transformed into feelings of high excitement and a full on adrenalin rush.
The very weather conditions that had caused my despondency created the awesome situation we were about to experience.

As we drove down that gravel road heavy drizzle smearing the window, we both spotted a bird flying along the edge of the road towards us.
We knew exactly what that bird was, a Black-fronted tern. What was even more exciting was that we could see more birds behind the lead bird working the road edges.

Luckily we were in a suitable place pull the wagon off to the side of the road and Steve hit the brakes.
We spilled out on to the side of the road as the birds worked their way up the edge past us.
Clickerty click, click went my camera, but clicks were really slow clicks. The shutter speed was abysmal.
Experience teaches you to hear and feel when the shutter speed is too slow. You don’t need to look through the viewfinder to know, you hear the lag and can feel it.
So up went the Iso settings to 2,500 and down went my F.Stop to 5.6 and still I was waaay too slow.

We soon learned that the Terns were working the long grass along the side of the road, hunting for worms.
Those Terns were jinking and jiving all over the place and then at times hovering in one spot looking down for worms with fast beating wings.
Where is the fast shutter speeds when you need them? 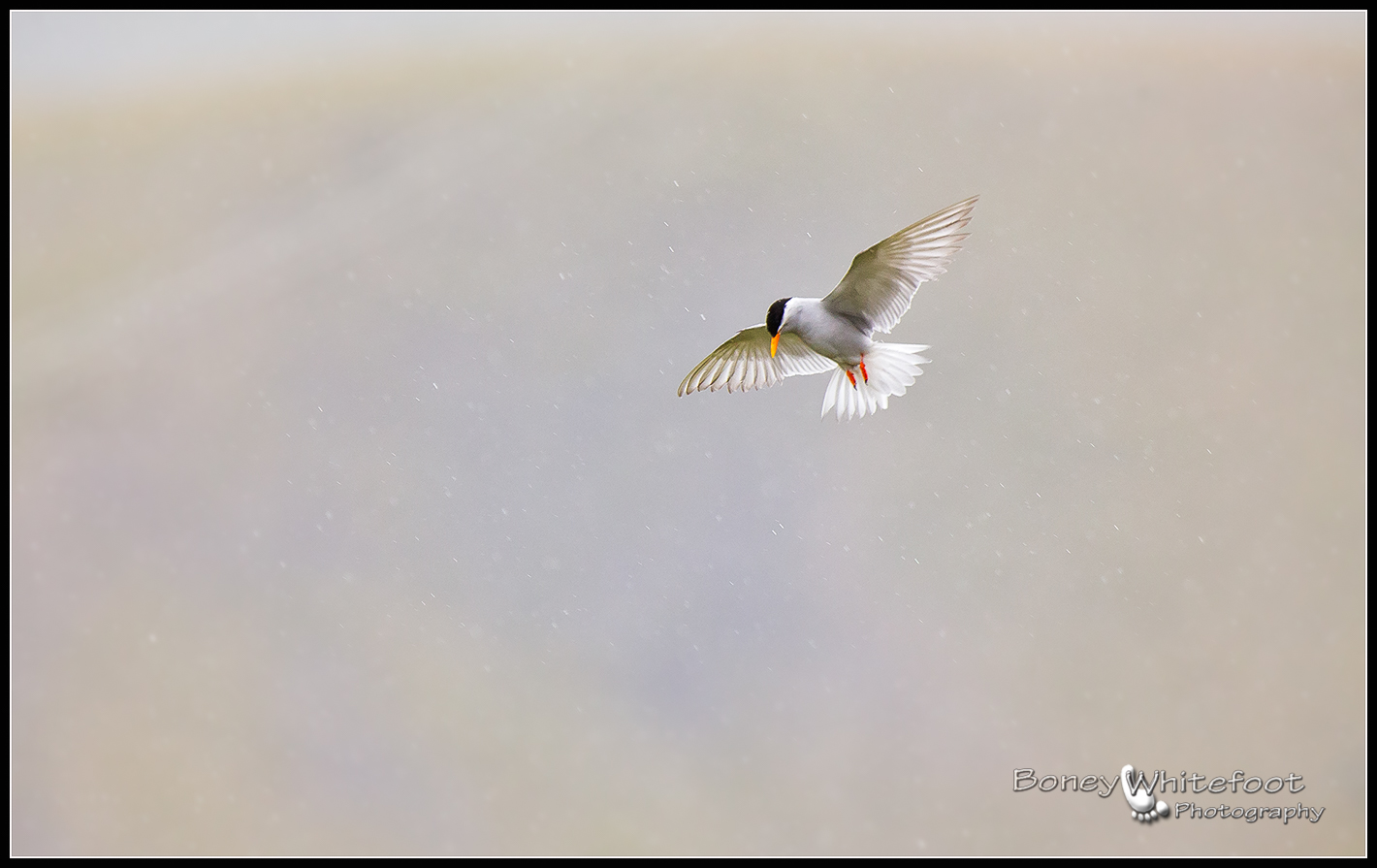 The soft light and fast wingbeats made getting tac sharp images more good luck than good planning.
Wisdom is that when in doubt try rapid fire burst mode and hope you score at least one good shot. 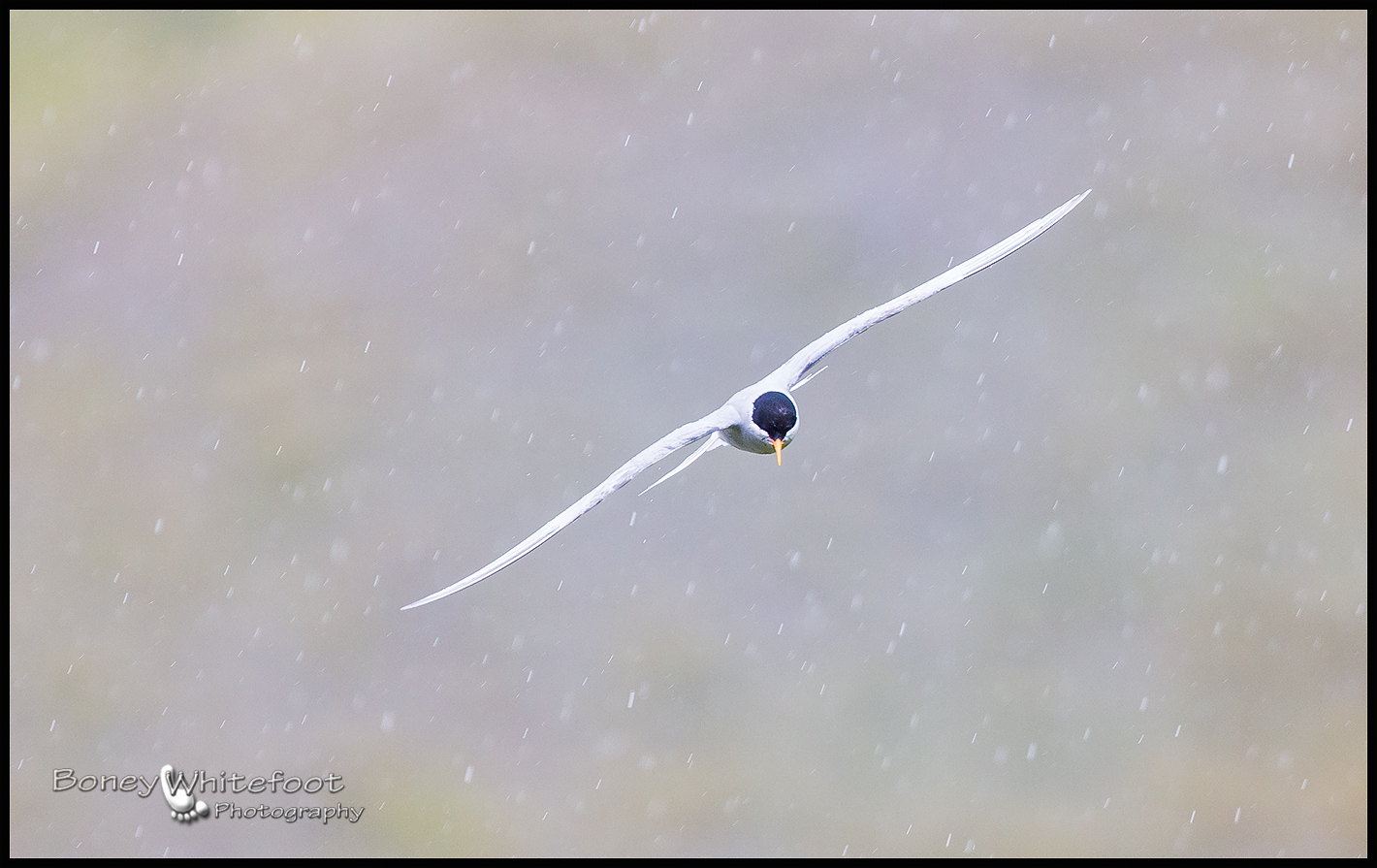 The birds basically ignored us as the rain had bought a feast of big fat worms to the surface and they were intent on feeding them to their chicks. The chicks were waiting for them way down below us on the river bed.

The very conditions that had me feeling down, had, in fact, led to the golden opportunity we would never have had if the weather had held. Those birds were there for the worms, the worms were there because of the rain.
Had it been fine and the birds not flying over the road we would never have seen the colony, we would have simply drove passed totally unaware.  The colony was  200 meters below the road over a cliff, the cliff was 50 meters off the road edge. This is not the first time that the conditions that had me feeling down actually lead to  success.

Slow shutter speeds made things very difficult but we just kept shooting and we both got some keepers for our efforts. 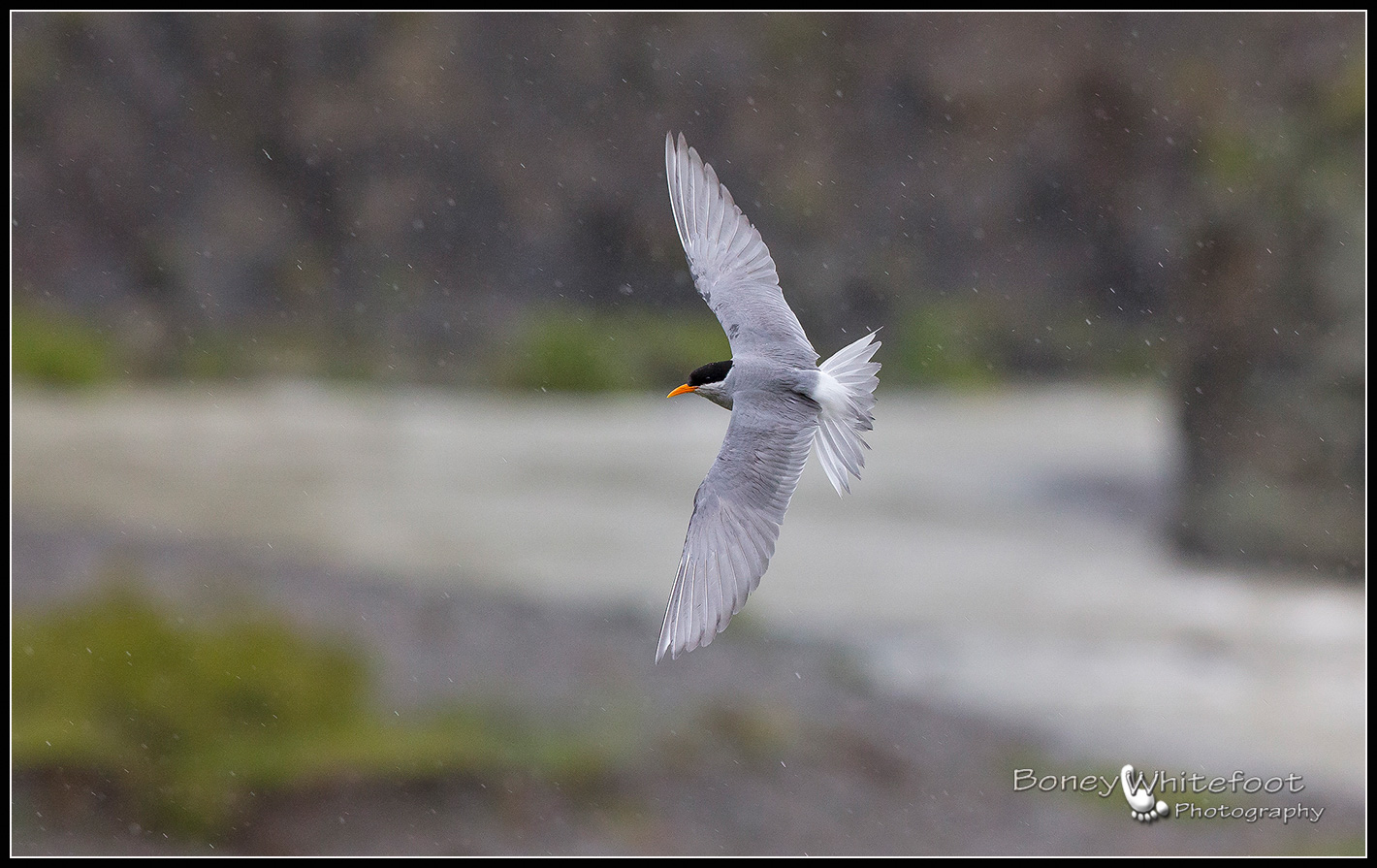 The colony was way down below us 50 meters off the side of the road, had it been fine we would never have seen that colony  200 meters below us over the cliff.

Next time we will continue with the Molesworth leg of the trip.

The start of the late Summer/Autumn Workshop Season

Mid-February saw my first workshop of the year with Elizabeth Taylor.
I know right?
How often do you get the chance to take Elizabeth Taylor out for a photographic workshop eh?
In my case twice LoL.

This was Elizabeth’s second workshop with me. The first workshop was over a year ago. Since then, Liz has put to good use what she learnt back then to great effect.
All Liz needed this time around was a quick refresher and a few new tips to put in her photographic tool bag to widen her skill sets.
Some people are naturals when it comes to bird photography and Liz is one of them. Give people like her a camera and a few skills, turn them loose and they will take to it like a duck to water.
I have learnt more about teaching clients from my clients themselves than all the books and essays I have read about it.

With bird photography, lots of thought has to go into the mix before you even approach your subject.

A typical workshop goes like this.
While in the planning stage I ask what specific skills my client wants to learn. Teaching those skills takes precedence over everything else.

I developed this style of teaching after one client at the end of our workshop said that they had learnt more in one afternoon just watching and asking me questions compared to many hours watching youtube videos online.

Most of Elizabeth’s workshop was just us, side by side getting on with it and taking photos and when Liz had a question I could give her my answer.
Elizabeth and I had a wonderful day with Spotless Crakes and Fernbirds in the morning and then a trip to a small pond that holds Dabchicks or weweia in Māori in the afternoon. Elizabeth is a tiny woman but she is a human dynamo and never seems to run out of steam.

Elizabeth’s patience was rewarded with this very close encounter with a Spotless Crake. 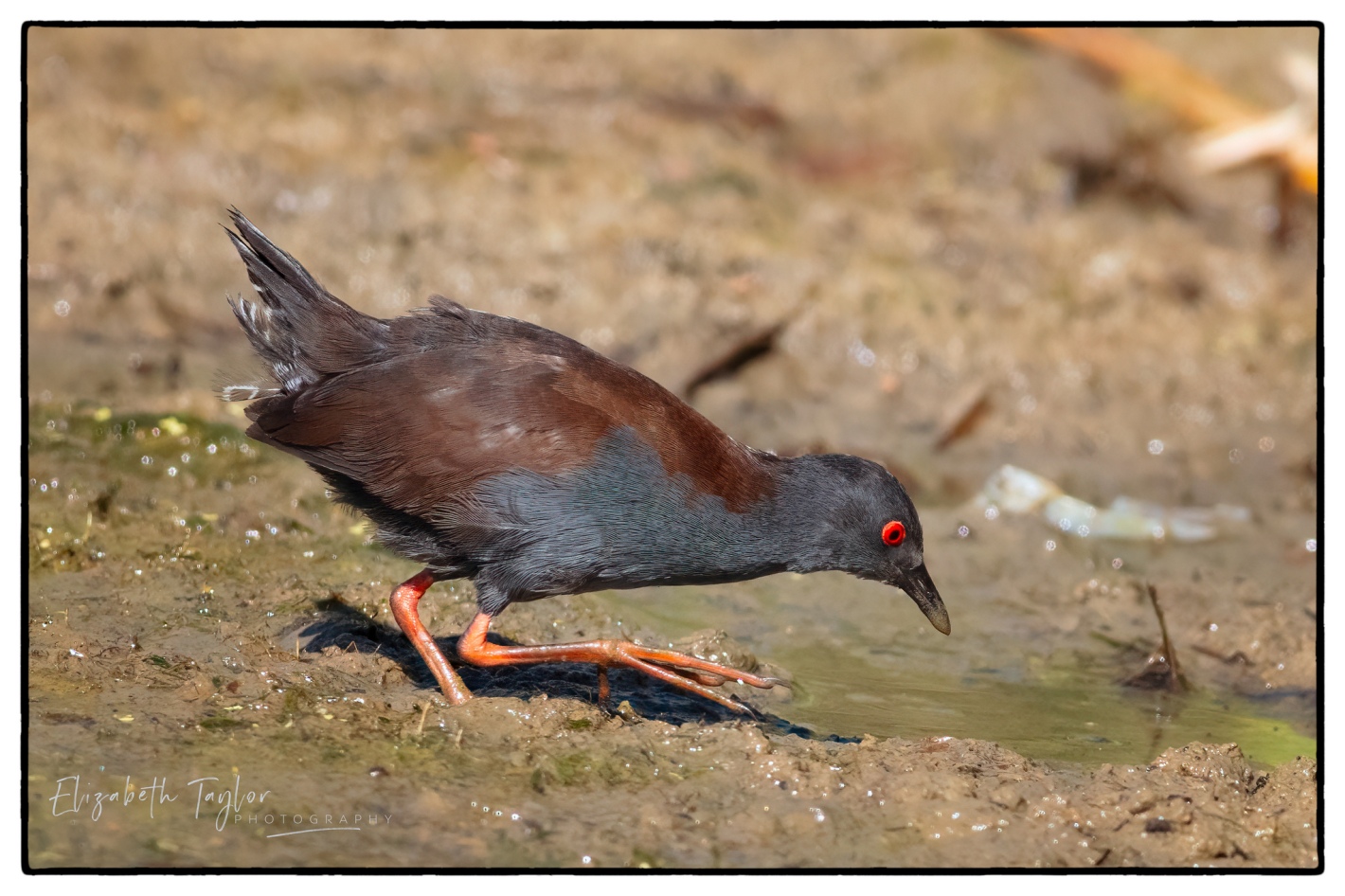 The Dabchicks were feasting on tadpoles and Elizabeth wasted no time in nailing her shots. 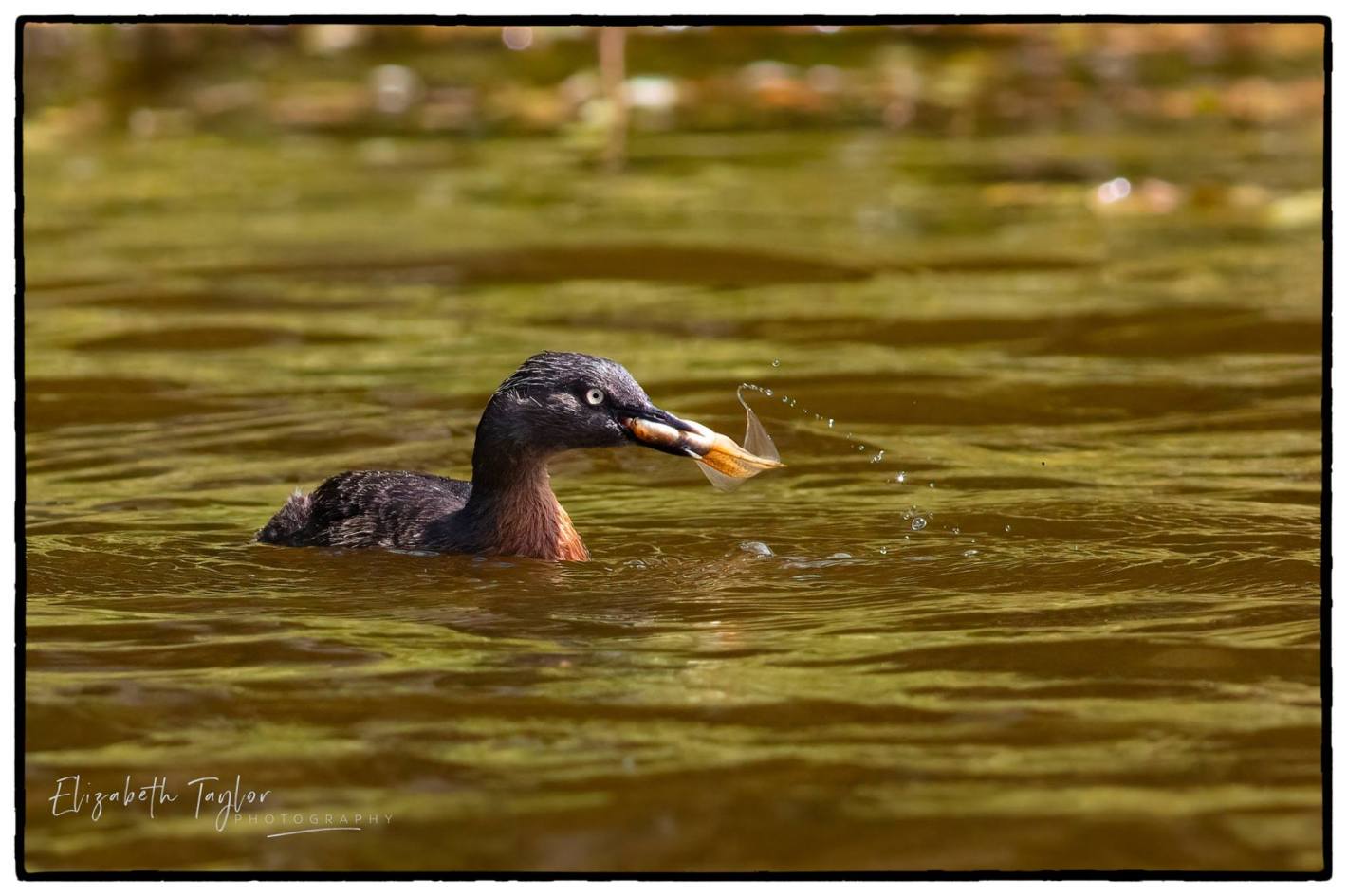 Liz nailed this Dabchick with his prize, a Tadpole

While on Elizabeth’s workshop we noticed the dabchicks sneaking off out of sight for short periods of time. We then discovered that they had a nest tucked away in the long grass growing over the edge of the pond. 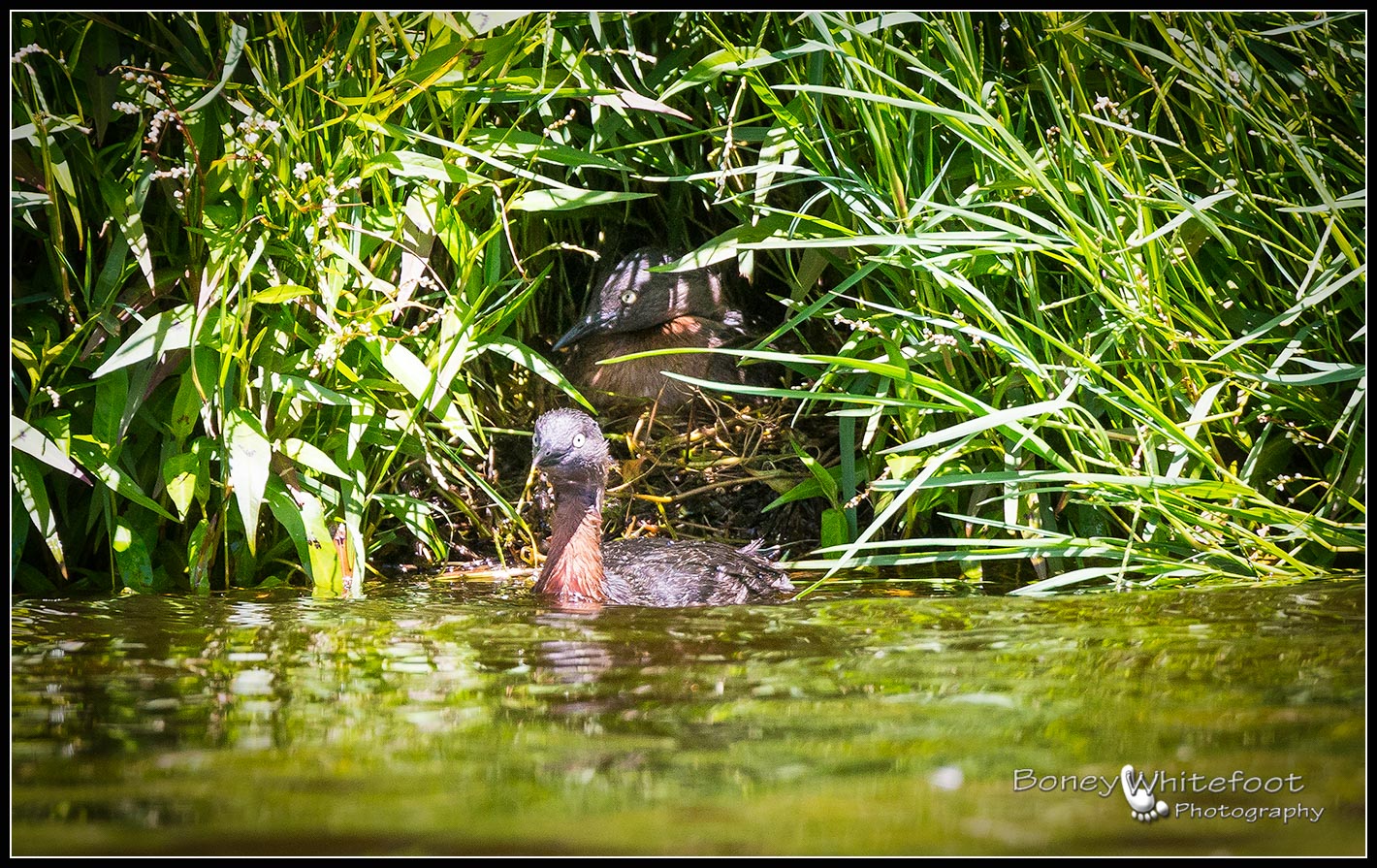 This would open a  golden opportunity to photograph upcoming baby Dabchicks.

I knew then I had a perfect opportunity for future workshops when these birds had babies.
So I got in touch with a few people on my list who had wanted a workshop, but I had been putting them off until something special came up and this was it.

Elizabeth and I had a wonderful day with Spotless Crakes and Fernbirds in the morning followed by weweia or Dabchicks in the afternoon.