What on earth have I been doing.

Ive been very busy, either out in the field taking photos, or working away at home on my image gallery.
Im behind in my monthly updates  and the image gallery is a massive task as I am uploading hundreds of images for sale so I live in catch up mode.

Breeding is in full swing, with the first batch of chicks, especially our Dotterels and Oyster Catcher chicks racing around the beaches keeping us busy and covered in sand.
Heat, wind, sand, sand and more blasting sand has been my constant companion for the last 6 weeks.
This is our windy season as the temperatures are rising leading  into summer and the heat shimmer has raised its ugly head (more on heat shimmer later in another post).

The month started off with a trip to Staglands for a workshop.

Staglands has a great variety of domestic and semi-domestic wildlife.
Finding the birds is not hard, but photographing them is another matter altogether, this makes Staglands an ideal venue for photographic workshops.

The male Wood Ducks are always a star attraction because of their stunning colours.

Next up we were entertained by the gold medal-winning aerobatic red-eared slider turtle team. 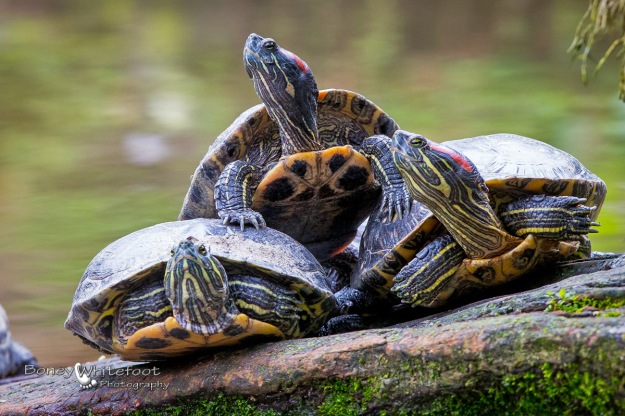 By the end of the weekend, we were all worn out and went back home to our computers with memory cards bulging and more than a few days of sorting and processing to look forward too.

Next up  Steve and I got a chance to photograph some pōpokotea or White Head.

The pōpokotea or White Head occurs only in the North Island of New Zealand with a very similar bird the mohoua or Yellowhead occurring only in the South Island which sadly I don’t have a photo of YET.

pōpokotea or Whitehead.
Small and zippy these bird can give you a very good work out trying to nail them.

One early evening  Steve heard a ruru call just down the track from where we were scouting for Shining Cuckoos, so when we had more time we revisited the location, this time with the ruru as our main target.

Introducing Smudge, a female ruru or New Zealand Morepork.  so named because she lives in a very dark gully where the low light means slow shutter speeds and getting sharp clear shots of her are a real challenge. 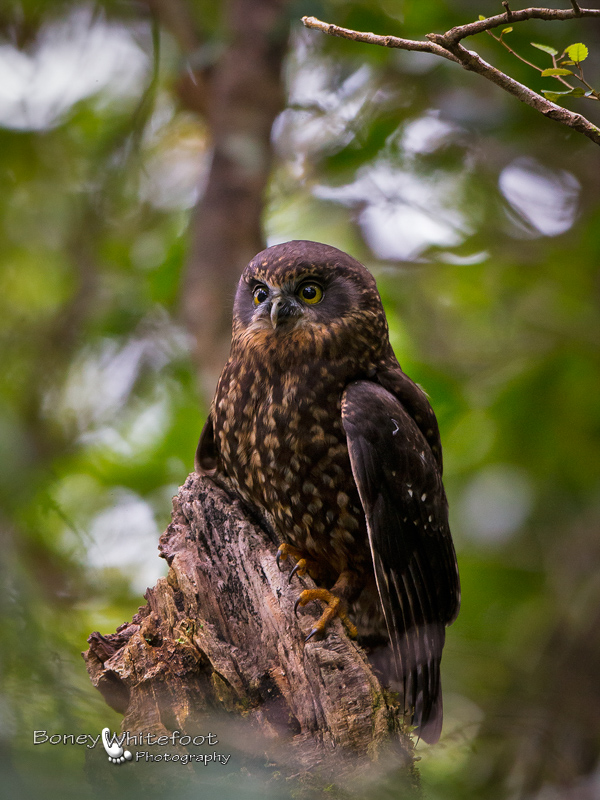 Female ruru or New Zealand Morepork are quite a bit larger than the male and don’t have the strong colour contrasting in their feathering that the male has.

Such a pretty gal she has given us a lot of joy photographing her.
She has been absent of late and we hope its because she is on a nest.
If you are a female ruru, you get to look after the nest and eggs all on your lonesome as the male will not participate in raising the young until they leave the nest and become perching birds.

Next up was a trip back to Zealandia as both Kath and I wanted some more Whitehead shots so that is what we set out to do.
It was slim pickins on the Whitehead front, but all the other species put in an appearance and in abundance.

tīeke the Saddle Back is a loud bird and lets you know you have entered its territory during nesting time.

hihi  or the Stitch Bird are amusing little birds, very stroppy and often come in with tails straight up , the feathers on their heads erect and full of attitude.
If you were to go back 20 years, you would never have seen this bird on the mainland of New Zealand, but thanks to the team at Zealandia and a hand full of other peoples in other locations around the country, the hihi, once again is breeding and starting to thrive in some of our forests.

Finally, we found a whitehead that was kind enough to let us photograph it.
pōpokotea or Whitehead are very seldom noticed by most people although they are far from rare.
They tend to stay in the tops of the trees and move around the forest in groups chartering much like a Chaff Finch at times. Males have a whiter head than the female 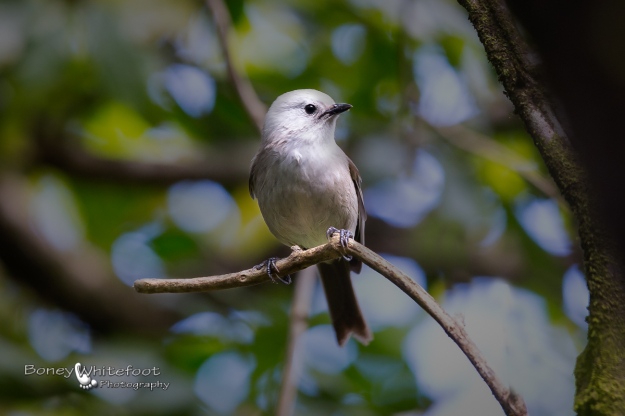 A Male pōpokotea or Whitehead.

Next on the agenda was a little project Steve and I have been working on for a few years now.
Photographing Pheasants is a hard enough challenge in its self, but to photograph a Cock Bird during its call with its wings beating wildly in the air and at an incredible speed is a different challenge altogether. I have many photos from over the years but still, none that I consider THE definitive photo, the quest continues.

We managed to find a Cock Bird on sentry duty and settled down to keep and eye on him as he patrolled his territory hoping that he would issue his challenge where we could photograph him.
15 minutes later he had positioned himself for his call and clickerty click, click went the 1DX.

Even at 3,200 hundredths of a second, the shutter was not fast enough to freeze his wings perfectly.

Next up was a quest for one of our favourite birds the pīpīwharauroa or Shining Cuckoo.
The day was fading and it was last light, in a last-ditch desperate effort we approached a tree we had photographed a Shining Cuckoo in the year before to give it a final whirl.  No sooner had the call gone out than this bird landed right in front of us centre stage.
Often Bird photography is just like this.
All day nothing happens and one becomes reconciled with the feelings of disappointment only to have victory at the last possible moment and this folk, brings the bird photographer out after that hard to get bird time and time again.

To have this  Bird respond to the caller land right in front of us in wonderful soft light was the highlight of October for me. 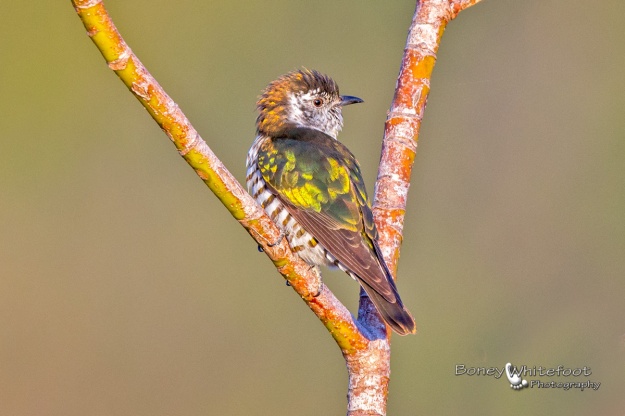 I like the way the two branches frame this shot.

October was such a huge month this year so I have to leave out so many images I would love to post, but I will wind up this month with what became a labour of love involving a number of us.

While Louise AKA Danger Mouse was out scouting for Birds on the spit at Waikanae she spied a tūturiwhatu or Banded Dotterel nest and shared the news among us local bird peoples and thus began a 4 week vigil, shared among 3 teams to keep an eye on the nest and report the moment any of the eggs hatched.
Why the fuss about the timing?
Because once the chicks are more than a day old they can run like Olympic sprinters and don’t stop until there is a good distance between them and us.
During those first few hours when the birds are fresh out of the egg, they tend to crouch and freeze when people are nearby giving us a chance of getting close.

Mr Dotterel on nesting duty, exciting times are ahead. 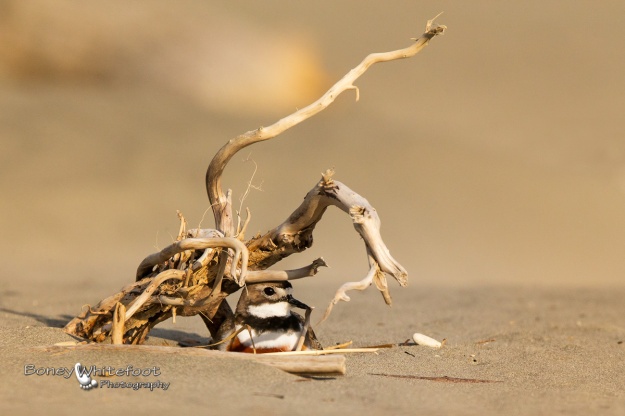 tūturiwhatu the Banded Dotterel on the nest.

Mrs tūturiwhatu the Banded Dotterel
Mrs tūturiwhatu, notice she does not have the black band around the base of her throat like her hubby ?

You peoples will have to wait till next months report to see how it all pans out as we have reached the end of October.

Ooooooh one last thing, did I mention wind and the sand?

This is what one has to put up with, this time of the year, sand gets everywhere and I mean everywhere, considering that one tries to get as close to the subject’s height for a good profile this means being low down in that mess.

I will leave the last word up to Mrs Smudge.