Steve gave me a ring and asked if I would like to accompany him for a few days and hunt for the elusive Bittern and Spotless Crake in the Hawkes Bay area, Riflemen were also on the cards along with tomtits and whiteheads.

My first thought was Black Fronted Dotterels as I have always thought they are the coolest looking of all the plovers and dotterels, they remind me of a miniature badger with feathers and I knew they would also be on the cards.
So it took about a millionth of a second to accept Steve’s kind offer and we set about formulating a plan of attack and keeping an eye on the upcoming weather patterns.
The weather wasn’t too flash for the next few days but it would improve in about 4 day’s time, so we planned to be heading into the improving weather and this was to be the case.
We arrived in Napier with the sun shining but the rivers were in great flood.
This was to lead to one of the most amazing bird spectacles I have thus far witnessed.
Once we were booked into our camping ground , we were off to our hunting grounds and upon arrival we noticed a mob of Black Billed Gulls wheeling and diving in the surf out on the beach front so we made haste to snatch a few images.
Click on the image to see a bigger size.

A Black Billed Gull hunts for tiny Eels along the beach.

As we watched from a distance we could not make out what had got the birds into frenzy until Steve took a shot and zoomed in on the camera monitor and well blow me down, they were eating tiny Eels.
We slowly made our way closer to find the beach covered in thousands of small Eels and the Gulls were cleaning up.
The native māori name for Eel is tuna.

A Black Billed Gull with a Eel captured on the beach.

It wasn’t long and we were in the swing of things and we both got some pretty good images. 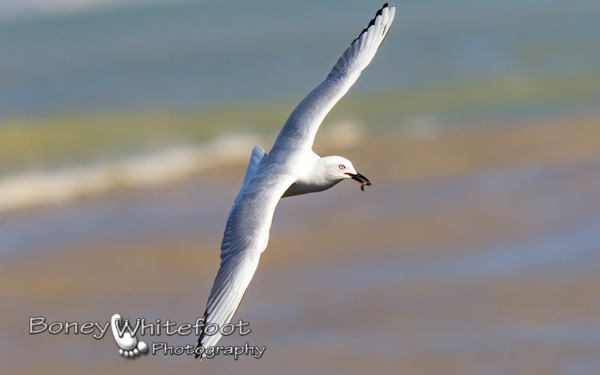 Black Billed Gull with a Eel

There was a Black Shag just out in the surf that was also in on the act.

It was truly amazing to see this bird seize much larger Eels who were likewise were out there in the surf feasting on their lesser sized Eel brothers and sisters.

Gluttony certainly seems to be a common sin among Black Shags and some of the Eels and predatory fish the Shag grabbed were far too big for the bird to handle. 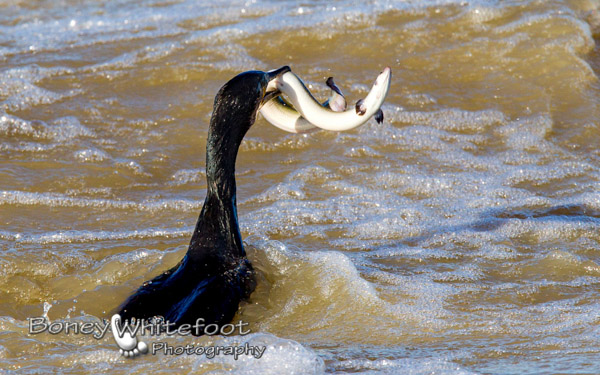 Black shag with a Eel far too big to eat.

Perhaps this one will fit?

or perhaps this one?

Black Shag with a large fish.

Black Shag with a fishy dinner

The river was in a huge flood and must have swept the smaller Eels out to sea where they became the main menu for a myriad of hungry mouths.
These tiny Eels were not freshly arrived migrating Eels, as those just arrived from their epic journey across the ocean are totally transparent where as these Eels were well coloured up so our guess is that the huge flood washed them all out to sea.
And just like that the Eels were gone.

A Black Billed Gull searches the beach for goodies

I decided to try and find a Black Fronted Dotterel so staggered off over the pebbles in search for one, which I found, but the light was wrong and no amount of sneaking was going to get me a decent photo of this bird.

Black Fronted Dotterels are tiny birds and one has to get very close to get a decent shot which can be quite a task.
We have Black Fronted Dots down home but no matter how sneaky I try to be with our local birds on Lake Wiararapa I can never close the deal.
Soon the light was gone and any chance of a good shot was gone with it and we headed back to the camping ground, on the morrow we would try for the mysterious Bittern and soon after day break the next day we had returned.
Where to start looking was being debated, Steve and I are both been very keen hunters and have been all of our lives, it was through hunters eyes that we surveyed the ground before us and made our plans.
We picked some high ground and searched the grass and swampy areas with our Binos and decided to head out to a long rectangular swampy patch and see what’s shakin.
Through the chest high grass we made our way to the patch of open water and there at the other end stood 2 Bitterns fishing for frogs.
We snuck in but couldn’t resist a peek at the birds on our way in just to make sure they hadn’t shifted.
This was not a wise move as they made us out immediately and started to make their way into the long grass at the far end of the pond.
We both got a few shots of them but we had learnt our lesson, we had, had the chance of some wonderful shots and had our stalk come to a premature ending.

They flushed ahead of us in the long grass and we had a look around for more but decided to head north to get some Rifleman photos.
It wasn’t long before the memory of our mistake was swallowed up by the frantic attempts at shooting a bird not much larger than 2 bumble bees glued together that can move faster than a speeding bullet skipping through the branches high in the tree tops above us. It was a long day indeed but we got some fantastic Tomtit shots along with a few useful Rifleman shots. 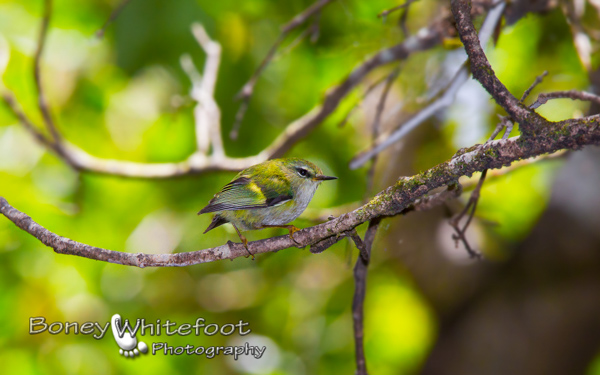 I love Tomtits.
Don’t forget click on the image for larger pics 🙂 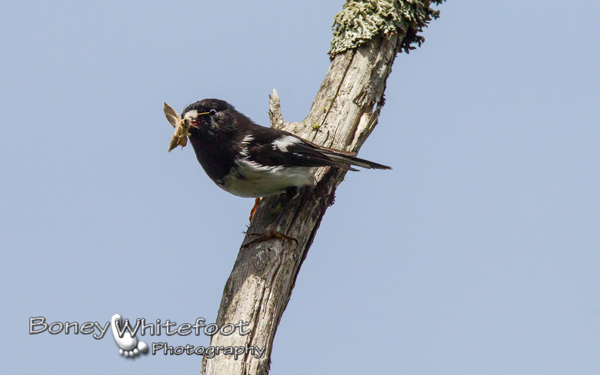 A Tomtit with food for his Babies

Next day we were back in the Bitterns territory and as I had a really bad attack of hay fever the morning before a team of wild horses could not drag me into that long grass again so I was going to stay around the beach for the morning while Steve stalked the swamps upstream.
Steve whispered to me as we disembarked from the wagon there’s a black fronted Dotterel right beside us, I thought he was joking but he wasn’t.
All aquiver this was my chance, so I hit the deck and crawled toward the busy beast as it probed the mud for worms oblivious to my hideous intents. I wasn’t going to screw this up and as the light wasn’t yet all that bright we spent a fair bit of time trying to get some useful shots.

to me these birds looks remind me of Racoons with feathers

Having believed we had indeed stolen the soul of the wee chappie, Steve went off in pursuit of the Bitterns while I made my way out into the estuary proper, following the Black fronted dotterel hoping for the light to improve. 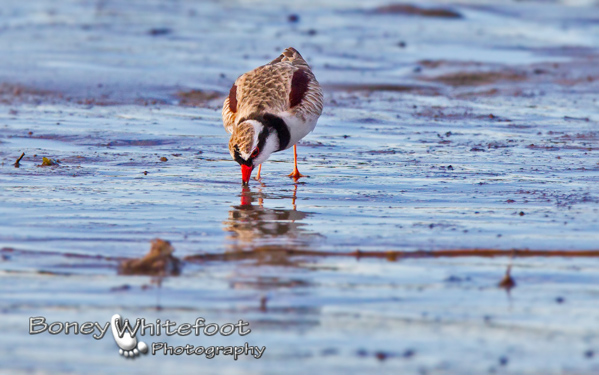 Soon I had 2 pairs of the tiny birds and to my amazement one pair became frantic, uttering a loud excited chattering and began to mate right there in front of me. Clikerty click, click, click went the 1D and although the sun was on my wrong side I got some shots I had not expected. 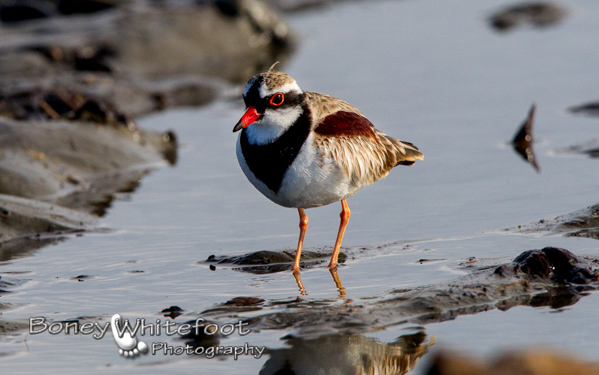 Heart beats restored to a manageable rate the morning wore on and Steve returned having not seen a bird but determined to return at a later date to steal the soul of the Bitterns through the camera lens. The trip was a success, we had witnessed a natural event I had never seen before with the Eels, we had been fairly beaten by the Bitterns and Spotless Crake but the tide will turn and we will return.
Well it’s that time of the year again when many of us think about the birth of Christ and His plan of redemption for mankind.
What a pity many have turned such a wonderful time of the year into a time of excess, both in spending money and over eating and drinking.
Christmas has become a consumer crazed blot on western society, often with the focus on showing how much we love each other, by how much we are willing to spend, on each other.
What a pity we don’t see personal time as the currency of love.
How much time are we willing to invest in each other?
Jesus invested His own life time looking forward paying with His life so we can enjoy a loving, open and honest relationship with our creator.
He came to earth as a baby and learnt first-hand what it was like being human, experiencing life, the same way as it is available to us all. He never sinned, He lead a perfect life and became the perfect example for us all to follow. He can identify with us, He is not a distant uncaring God but an active participating and loving parent.
Take it easy out there this Christmas , don’t turn it into a commercial exercise but become willing to share yourself with those who love and depend on you.
God bless ya all dudes 