Last year, our native Falcon or Sparrow Hawk (Falco novaeseelandiae), known to the Maori people as Kārearea was nominated New Zealand’s bird of the year.
As luck or good planning would have it, we Steve Richards and myself had been planning a trip to the Bay of Plenty to photograph the New Zealand Dotterels and then onto the Firth of Thames to visit the Miranda shore bird centre and on the way home we would be passing through Rotorua, the home of the Wingspan Bird of Prey Centre, a place best described in their own words as
“a place where people can visit and see birds of prey up close during interactive flying displays, hosted by the country’s leading experts.
The displays showcase the spectacular flying skills of these amazing birds and are a unique educational experience enjoyed by children and adults alike”.
Well if you do indeed want to see the spectacular flying skills of these amazing birds, Wingspan is just the place to see it. 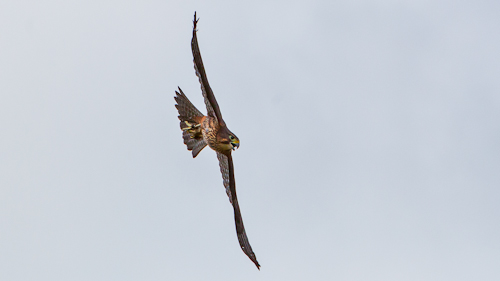 Kārearea comes in three forms or perhaps subspecies as defined by Dr Nick Fox the man who was the first to launch any in depth research into the numbers, habits and range of these birds and is as follows.
The Southern falcon:
This bird is middle sized and inhabits Southland and Fiordland, in Fiordland it preys on unsuspecting Wapiti calves.
The Fiordland Wapiti foundation is trying to get them to target Red/Wapiti Hybrids and leave the pure Wapiti alone. Just joking folks

Secondly the Bush falcon:
This bird is the northern most and smallest form of the bird, ideally adapted for hunting the bush lands and less open terrain of the North Island.

Finally the Eastern falcon:
This bird is the largest form of the bird, utilizing the more open tussock plains of Central Otago, South Canterbury and the Mount Cook regions.

The Kārearea is our fastest flying raptor and is endemic to New Zealand (that means it is found only in NZ)
Nothing in this country can match this bird for speed and acrobatic maneuverability.
Being one of the smallest raptors in the world means that this bird is ideally suited for dealing with our tight forested bush clad mountains where it dines on smallish birds, rabbits and hares.

Some history of the research into these birds.

The Kārearea has been fully protected since 1970

When Dr Nick Fox (founder of the Raptor Association of New Zealand) arrived in New Zealand to study these birds from the UK in 1974 he was informed by the then Wildlife Service, a pre-runner to the now Department of Conservation that there were only 6 known breeding pairs in the whole country.
That number really surprised me and I’m sure there were many more breeding couples out there producing baby ferocious falcons, but it does go to show just how little was known about the bird by the authorities at that time.
Dr Fox set out determinedly to remedy that situation and eventually he described the three forms of our Falcon, but stopped short of calling them a subspecies set. Dr Nick Fox in his article that he penned for the 20 Year anniversary edition of the Wingspan magazine does not give any reason for this and it is from this article that I am gleaning many interesting facts and opinions about Raptors in New Zealand.

Atareta zeros in on the target a bird wing swung on the end of a light rope, with wings cupped he is going unbelievably fast. 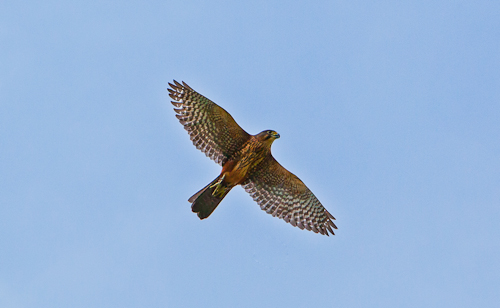 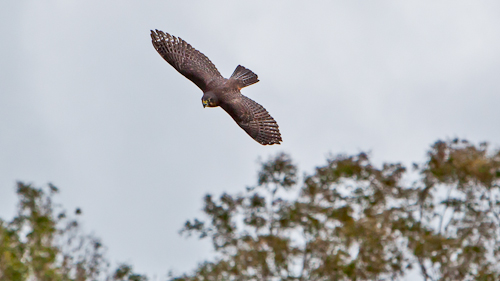 Threats to the Kārearea
The Falcon is not a scavenger unlike the Harrier Hawk, but will take advantage of the weak and slow moving, so the birds do become susceptible to secondary poisoning from Rabbits dying from the lingering effects of 1080 along with other unfortunate creatures dying a slow and painful death from the dazzling array of humane poisons Doc and the AHB spew out around our country. Sometimes a southern Fiordland Falcon can be stomped cruelly to death by an enraged Wapiti mother whilst it is dinning out on the baby Wapiti and not watching its tail feathers.
Most seriously though and much to my surprise, Man appears to be the biggest direct threat to this mighty bird.
The Kārearea is a cunning, intelligent and calculating killer, when the bird has a find like a chicken coop, (which to them must be like a kind of Raptors super market), the bird will return to the coop daily, until the super market runs out of tasty yummy Raptor food, understandably a situation that the chicken owner cannot tolerate. 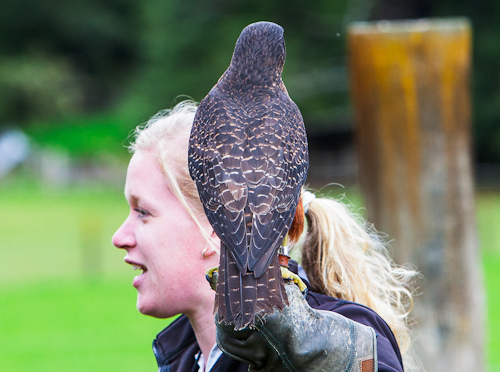 Lets see how this pans out, the life of a few half naked, mangy chickens, versus the life of a magnificent Falcon, still under the generally threated status.
I say get more chickens man and take photos.
Man and raptor history.
In Genesis, the book of all beginnings our Creator told us we were to have dominion over the fish of the sea, over the birds of the air, and over the cattle, over all the earth and over every creeping thing that creeps on the earth.”
In Genesis 1, 28 we read
Then God blessed them, and God said to them, “Be fruitful and multiply; fill the earth and subdue it; have dominion over the fish of the sea, over the birds of the air, and over every living thing that moves on the earth.”
So the mandate to partner with nature for mutual benefit was given to mankind to administer under Gods guidance.
The history of hunting partnerships between man and beast is a fascinating one and what could be more natural than that of a team between a raptor and his trainer. Sure we have dogs that hunt for us now, but first we had birds to take the prey out of the sky for us. Later we teamed up with flushing dogs that flushed prey into the sky or from ground cover to be taken by the raptor. Later came the setting or pointing dogs that set the prey (standing rock steady indicating the prey directly ahead of the dog) a net was thrown over both the dog and the prey and finally the pinnacle of perfection, the firearm, a shotgun of sorts was introduced into the equation to take the prey. Eventually the raptor was no longer needed, but there seems to be something wild and romantic about a partnership between a man and a half wild bird.

Wingspan holds demonstrations every afternoon starting at 2pm, when we were there it was very overcast, the worst conditions for photographing fast moving targets but we were there and we tried our best.

Meet the stars of the show

Atareta the star of the show.

Meet Millie the Millennium Falcon handled by Ineke Smets, she is considered a bit of a drama queeen, thats Millie not Ineke.

this photo was taken by Steve Richards 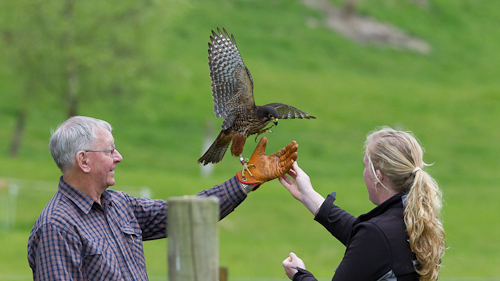 Everyone who wants, gets to hold the birds, something that the
young

and old get a thrill from 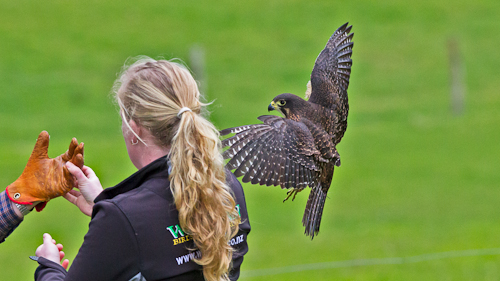 For more information on the great work wingspan does visit their website. http://www.wingspan.co.nz